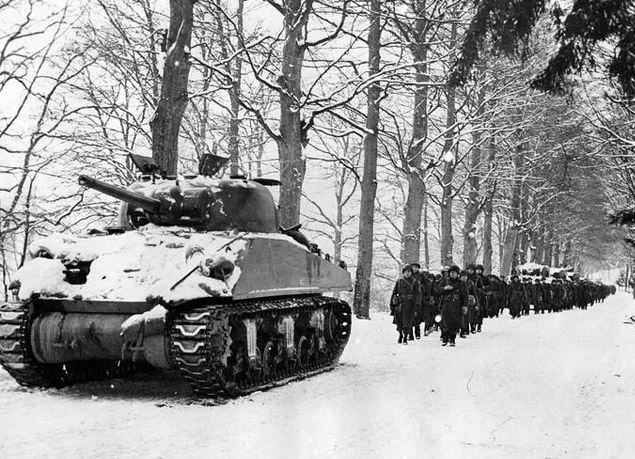 A soldier who was one of the members of the Tiger Division had something terrible to say. He had said that hunger, capture, and death seemed imminent when they were sent to Bastogne. Under such conditions, one could do nothing but pray. An artillery fire control specialist from Spartanburg, Rufus Lewis Jr., was already in Germany.

He heard the shocking news of a German breakthrough in Belgium and Luxembourg. His 10th Armored Division of tanks, support troops, and self-propelled artillery turned north on December 17, 1944. The troops covered 75 miles in one day and arrived in Bastogne. It was among the greatest marches in modern warfare’s history.

An encounter with chaos

The 10th Armored Division also called the ‘Tiger Division’, was the first to arrive in Bastogne. It was a key crossroads town. Once they reached there, what all the members of the division found was utter chaos. Streaming backwards through the city were the demoralized American infantry units.

The German artillery was destroying the place and the key crossroad was about to be overrun. The division lowered the barrels of its howitzers and started firing directly into the forest. They halted the German advance with all the firing.

Rufus Lewis was a sophomore in November 1942 at Clemson. Those were the days before college deferments. Every man, aged 21 or older, had the eligibility to be drafted. The probability of him getting drafted the following March was quite high. So, Lewis took the permission of his parents and joined the army.

He decided to volunteer as he was not a very good student. Lewis signed up at Fort Jackson and was trained at Georgia’s Fort Benning. He joined the 10th Armored Division as a fire controller for the 420th Armored Field Artillery. He was in charge of directing the fire of a battery of self-propelled 105 mm M-7 ‘Priest’ howitzer. Each of the five-gun batteries had a man calculating the angle of fire.

Lewis was also in charge of those. The Tiger Division was activated on the 15th of July 1942. It entered north-western France on the 23rd of September 1944 through the port of Cherbourg. It was a part of the Third Army of Gen. George Patton. It was one of the first units to enter France through the port that was newly liberated.

In the heart of Germany

The Army found itself in gruesome daily combat from the time that it had entered the country. It continued until it punched through the last line of Hitler’s defence called the Siegfried Line. It stormed into Germany on the 19th of November. The advance was halted when Hitler struck back in the Ardennes forest, 75 miles to the north.

Lewis was in the basement of a freezing farmhouse on the 18th of December 1944. He was calculating the flight paths of the 105 mm artillery shells into the German lines. Then, the 101st Airborne Division known as the ‘Band of Brothers’ came rolling into the Battle of Bulge. Upon their arrival, they claimed their glory.

The veterans of World War II are now in their 80s and 90s. Today, they are dying at a rate of 850 to 1,000 per day. The two million that are still alive are the remnants of those who served in the war. In many people’s eyes, they are the ones who saved the world.

Not only did they win the war, but they also forged the country during peacetime. They were the ones who produced the baby boom after returning to their home country. The veterans were the ones who generated the greatest prosperity in the planet’s history.