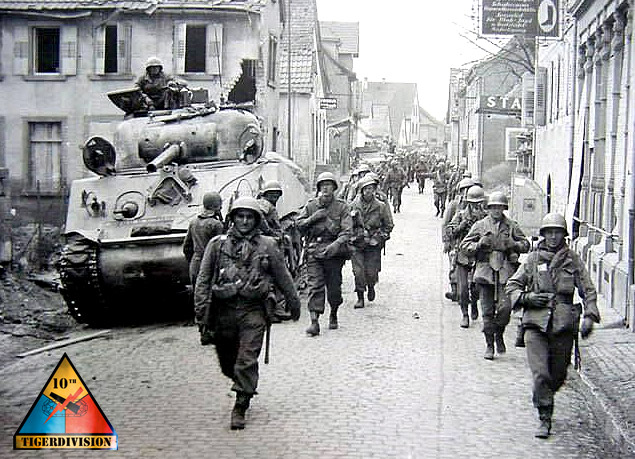 However, it witnessed action with the Seventh United States Army under General Alexander Patch towards the end of the war. The Tiger Division was inactivated on the 13th of October 1945 at Camp Patrick Henry in Virginia. On the 25th of February 1953, the division was assigned to the Regular Army, but it stayed inactive.

The Tiger Division entered France through the port of Cherbourg on the 23rd of September 1944. It went through a month of training at Teurtheville, France, prior to entering battle. At the time, it was a part of the Third Army under General George S Patton. Leaving Teurtheville on the 25th of October, the Division moved to Mars-la-Tour.

Once there, it entered into the battle on the 2nd of November, in support of the XX Corps. Later, the Tiger Division took part in the capture of Metz. After furious battling, the 10th Armored Division moved to the Siegfried Line. On the 19th of November 1944, it led the Third Army into Germany.

On the 18th of December 1944, Combat Command-B’s lead Sherman tanks, tank destroyers and half-tracks moved into Bastogne. These were the first combat troops to arrive at the town under threat. Col. William L Roberts, a CCB commander, split his command.

The Germans still had an advantageous position and the Americans withdrew closer to Bastogne. The pincers sent by the Germans to the north and south met and closed west of the city on the night of 21st December. The Tiger Division gathered a mobile reserve force ready to strike.

The CCB endured the chilly weather while also facing artillery barrages and bombing despite dwindling supplies and ammunition. The tanks of the Fourth Armored Division got through, at last, on the 26th of December. Despite this, the CCB continued fighting until the 18th of January.

The collapse of German defences

They crossed the Saar-Moselle Triangle and got to the Saar River. Upon crossing the Saar, they captured Trier and a bridge across the Moselle River. The German defences collapsed as a result of the loss of this heavily defended city. Commanders Dwight Eisenhower and Patton visited the Tiger Division and praised their efforts.

They advanced further about 100 miles and captured 8,000 prisoners belonging to 26 different enemy divisions. Following a four-day respite, the 10th Armored Division was among the divisions leading the Seventh Army drive into Bavaria. With quick night movements, the ‘Tigers’ kept surprising the Germans.

They were referred to as ‘Ghost Division’ by their enemy forces. As it entered Bavaria, the Division overran one of the numerous sub-camps of the Dachau concentration camp. It was located in the Landsberg area. This happened on the 27th of April 1945, earning Tiger Division the recognition of a liberating unit.